Why you should check out this art: Jack Harkness from Torchwood, The Pirates of the Caribbean's Jack Sparrow, and "Lucky" Jack Aubrey from Master and Commander: The Far Side of the World don't have much in common except for being Captains named Jack, but there's no reason why they can't date. Or hang out together in a lovely piece of fan art. 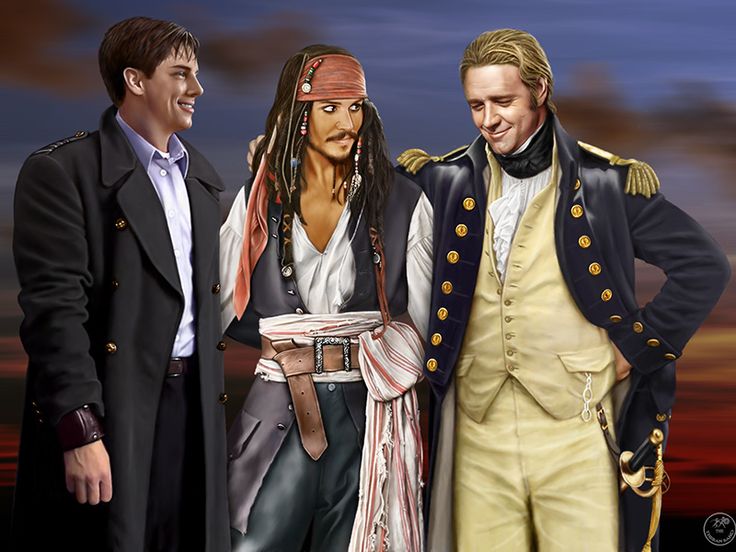 The Theban Band have also created pairing art for Jack/Ianto, Jack/Ten, and Jack/Nine, view it here.

Artists appreciate your comments! Feel free to let them know if you liked their work.

Why you should read it: This marvelous AU is set in the future of the "Rabbit Hole AU," a post-CoE reset of Jack's timeline explored in

nancybrown's previously recced Wonderland. The 'verse's premise is that Jack, with the Doctor's assistance, has edited the timeline so that Ianto and Lisa survive; eventually, they return to Torchwood Cardiff and enter into a relationship with Jack. In this story, Jack attempts a further "edit" to spare his family and the world the consequences of a first contact gone awry. But while Jack is the prime mover, this story could have been titled "Torchwood: The Next Generation." It shows us the upbringing and young adulthood of a stellar cast of OCs: Ianto and Lisa's son, who bears the weight of the whole enterprise; his two sisters; Gwen's son; and the mysterious Tony Tyler, displaced from Pete's World and drawn into the intrigue.

Told from multiple points of view -- much like the chorus of singers implied by the title -- the story shifts among all these characters, the expanded Torchwood teams, the political schemers of UNIT, and many alumni of other Whoniverse adventures. It's a deeply satisfying re-imagining of the canon future, full of humor, suspense, space adventure, and unexpected romance. The original characters show the stamp of their parentage but are terrific creations in their own right. Above all, the story gives us a Jack who has learned to fight for those he loves even in the face of their mortality, and it winds to a breathtaking conclusion, equal parts joyful and bittersweet.

Once again, celebrating all things Who with a day of universe slippage at Torchwood House. Some of you may have noticed the fact that yesterday, April 1st, we turned the comm into Torchwood House: The Doctor Files and recced only Who related items. What started as our April Fool's prank has turned into a yearly nod to our sister fandom. With no more adieu, I leave you with a list of some of the Who fic, vid and art that have caught our attention over the past year.

Why you should read it: So ever since what Donna recalls as The Night of Thirty-Two Text Messages and everyone else just remembers as That Night, Donna's been a little different to how she was before. And thus begins a simple tale of how Donna travels to America, meets up with those two Hell-raisers Sam and Dean Winchester, and what happens next. Told in a wonderfully conversational voice that nonetheless manages to capture the feel of the characters perfectly, this story is a joy to read and leaves fans of both shows content with the ending. Loved canon/Hated canon, it doesn't matter. This little fiction is a nice alternative to all the angst and drama, making room in the Winchester's apocalypse for some good old-fashioned common sense and physics.

Lovely bits of humor and fantastic asides make this a most enjoyable read.

Why you should read it: For anyone who was ever gripped by the end of the first Series, and wondered about the seeming lack of aftereffects in the second, this fic works as catharsis and packs a huge emotional charge. It's gorgeous, spare, relying almost entirely on dialogue and a few wardrobe details. But every word spoken feels utterly true to the characters, and the details are heartbreaking.  Despite its short length, it works brilliantly as a bridge between the two seasons while also creating its own unique, fleeting world. The image of Jack and the Doctor as Rose leaves them is something that's going to stay with me for a long time.

Why you should watch this vid: We may be two regenerations away from the ninth Doctor but he's not forgotten yet! As the vidder says, reincarnations never die; they just have to watch their replacements on telly.

This vid is a beautifully done, hilarious, review of the 10th Doctor's adventures, as a musical. The concept is brilliant, the editing and scene choices perfect and the song choices … good lord, they are fantastic!

I adore the ninth Doctor and watching his reactions to number 10 is one of the best things about this vid for me, well, that and the song choice for both Martha and Jack.

Vidders appreciate your comments! Feel free to let them know if you liked their work.

Why you should read it: This is really beautiful.

calapine ties altogether all of the threads and themes of the fifth series and makes them shine, turning her attention in turn to each of the four characters with depth and insight. It's also a moving tribute to Doctor Who as a whole, and captures all of the things I like best about the show, and why I'm so looking forward to its return.

Why you should read it: The question is: how long can they go on being Amy's boys without Amy? Although this story deals with loss and grief, it is anything but a downer to read. The story gives us a Rory who slowly comes into his own as a Doctor's Companion -- someone who can give and receive in his own right, who can choose and guide their adventures, and who, in coming to terms with what he's lost, helps the Doctor to do the same. There are stray cats, babies, and ex-Companions (Jack Harkness in tighty whities, anyone?), a well-meaning TARDIS, and alien aphrodisiacs -- in short, the full range of Whovian adventure and absurdity. But as with all good listfics, each vignette takes us a little deeper into the characters and gives us new ways to feel with them. A must-read for all Rory fans, it's also an insightful take on how Eleven deals with mortality, and an interesting spin on the events of S5.

dameruth
Rating: mature (sex)
Length: 4,900
Pairing(s)/Character(s): Ten/Jack
Genre/Category: Relationship study, sex
Warnings: None
Spoilers:  DW: Parting of the Ways, Utopia
Summary: What does the Doctor see, when he looks at Jack? Perceptions can change, in more ways than one.

Why you should read it:  The "stuck here together" trope is a fandom favourite: trapped in a cabin in a blizzard, glued together by a goo alien, stuck in a... time loop,   Here, Jack and the Doctor wait in pitch dark in a temporarily irradiated room and find some way to pass the time, but Jack also finds out how the Doctor really sees the universe's fixed point.

"I could try again to get the lights working," he began, but Jack cut him off.

"Don't bother. Save the battery power. We're not talking a full-out phobia here. I just don't like it." It wasn't fear that got to him, it was the creeping melancholy of remembering everything and everyone that had gone (and would go) into that final darkness, the one that kept spitting him back out again and again.


Authors appreciate your comments! Feel free to let them know if you liked their work.

Title: It's the End of the World (And You've Come Back to Me)
Vidder: bassairmoon (on youtube)
Song/Artist: The Last Day on Earth by Kate Miller-Heidke
Rating: standard
Pairing(s)/Character(s): Amy/Rory, Doctor
Spoilers: Doctor Who series 5

Why you should watch this vid: Rarely does a fanvid actually make me cry, but every single time I watch this one... Yeah, epic tears. It's sad, but also joyful because we all know how it ends. The song choice fits beautifully and the editing is superb! The epic love story of the Boy Who Waited for the Girl Who Waited. Seriously, go watch this now. Watch it many times!

Vidders appreciate your comments! Feel free to let them know if you liked their work.
Collapse